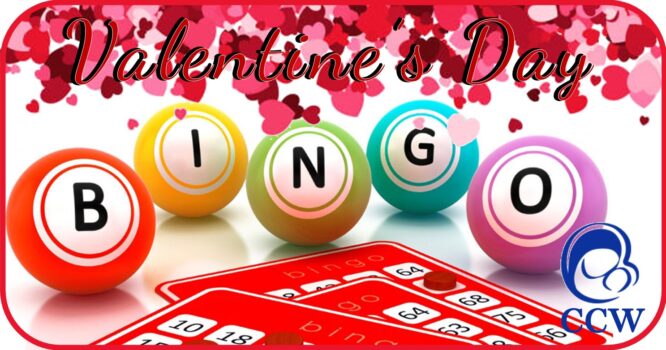 The Saint Patrick’s Council of Catholic Women is inviting all women of the parish to a Valentine’s Bingo evening on Tuesday, February 16th. We will have live (in -person) Bingo as well as virtual Bingo through Zoom starting at 6:30 PM. There will be a social hour with treats available for those attending in person beginning at 5:30 PM in the Social Hall, social distancing and masks required. After the social hour, we will head upstairs to the main Church for Bingo!! There will be prizes for winners and fun raffle gifts as well! It promises to be a fun night for all ladies as we have not been able to see each other for quite some time.

You must register online by clicking on the button “Click to Sign up” before noon on February 15, to participate, whether in person or virtually.

If you have never used Zoom before, no worries. You will receive directions through an email on Monday, February 15 by 8:00 pm via the email you sign up with when you register. In this email, you will also receive the Zoom Meeting link and any other needed directions.

Bingo cards will be available at the back of Church for virtual players beginning on February 6.

The CCW will be serving Cinnamon rolls after Masses on the weekend of February 6 and 7.

Saint Patrick Parish Council of Catholic Women (CCW) is a service oriented organization working under the guidelines of the National Council of Catholic Women. All women of the Parish are members of the CCW. In order to be an active member you may either belong to the Financial Support Group or volunteer for one or more of the service activities sponsored by the CCW.

The National Council of Catholic Women acts through its affiliated organizations to support, empower and educate all Catholic women in spirituality, leadership and service. CCW programs respond with Gospel values to the needs of the Church and society in the modern world. 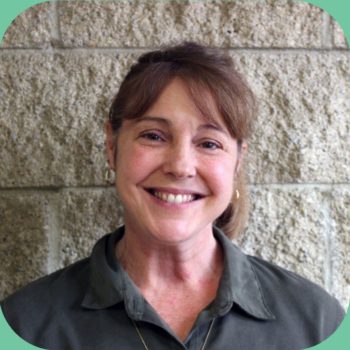 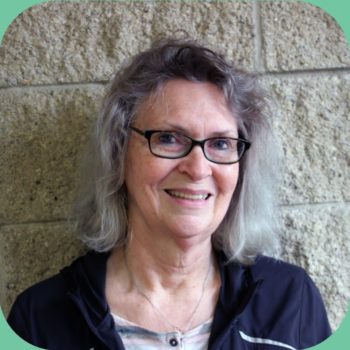 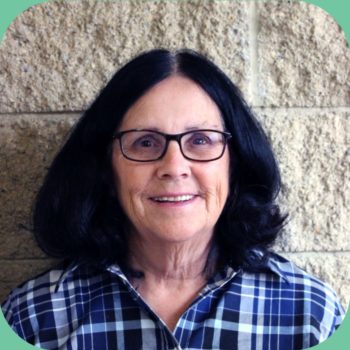 Advent Wreaths – We sell candles for the Advent Season.

Funeral Dinners – We help set up, serve, and clean up for funeral lunches, sign up to bring salads or bars, sign up to be a caller or backup caller for salads and bars.

Divine Cleaning – In the Spring we do some major cleaning in the kitchen.

Coffee Social – The CCW hosts two of coffee socials each year; duties will include serving coffee and donuts after Sunday Masses.

Quilters – This group meets weekly and sews quilts and donates to organizations.

Gala Project – We team up with the 4th graders at school and support their classroom project for the annual Gala.

Scholarships – We select a Hudson High School Lady and award them a college scholarship each year. 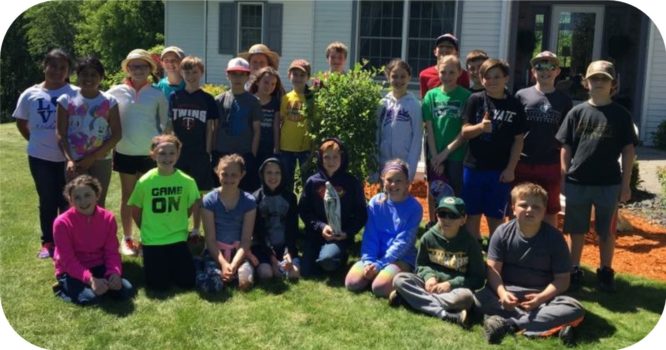 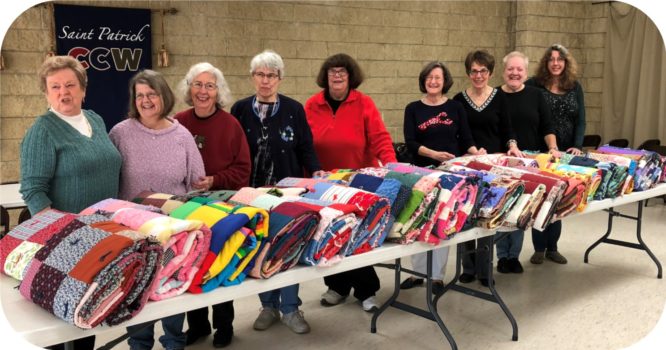 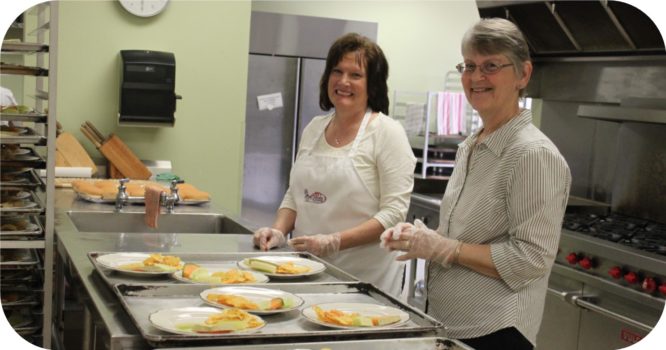 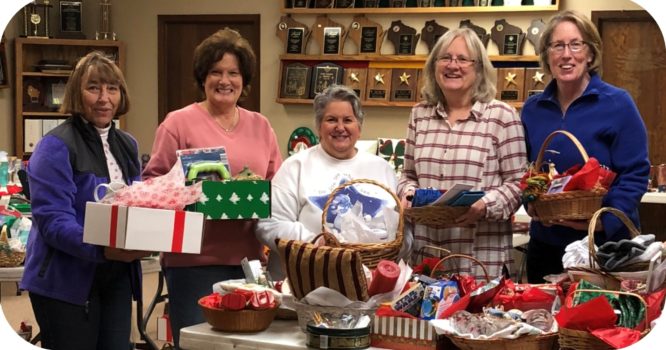 Blood Drive – We work in the canteen, donate cookies or bars for donors and/or food donations. 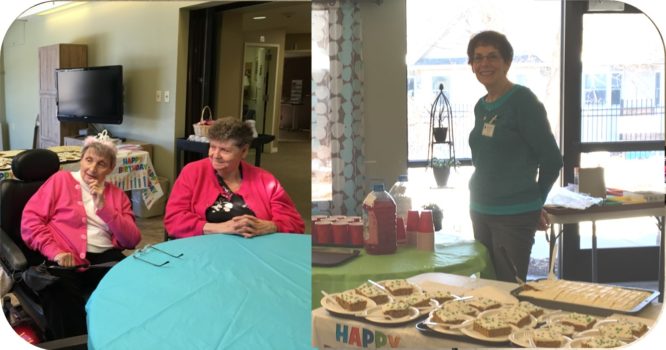 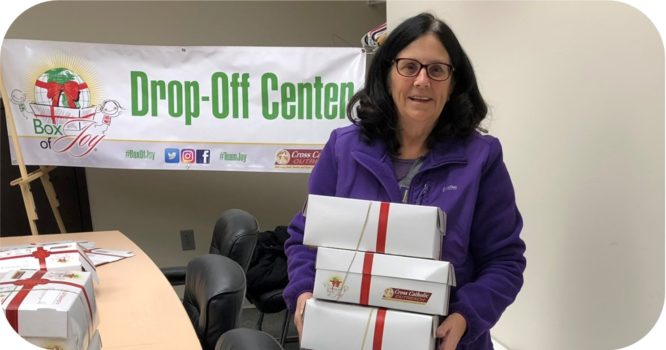 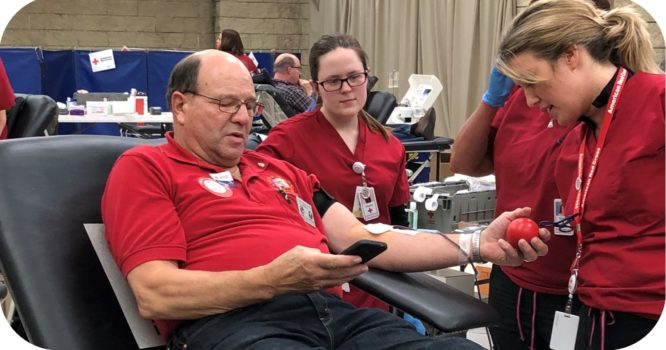 Christmas Tea & Bingo – A fun filled night of bingo for all women of the parish! Organize bingo equipment and purchase prizes and serve tea. This is a CCW fun activity.

Cards/Masses – We send sympathy cards and have Masses said for deceased CCW members. 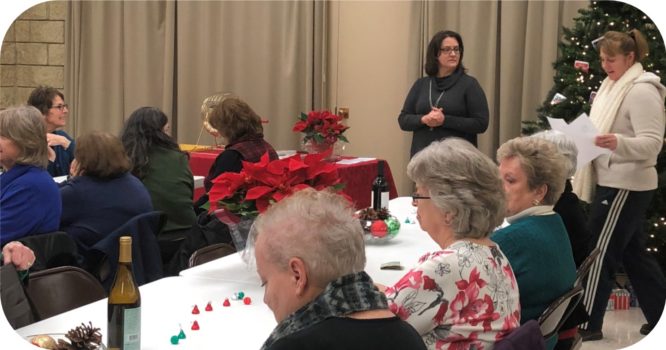 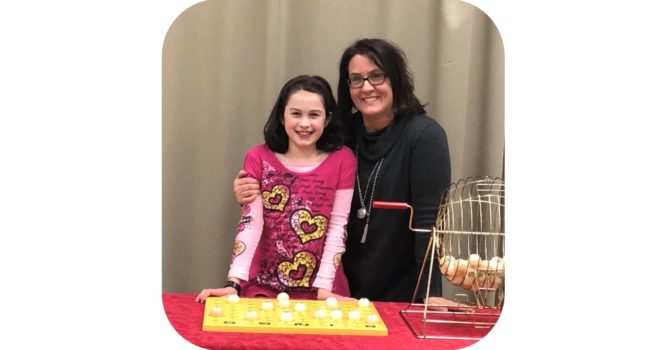 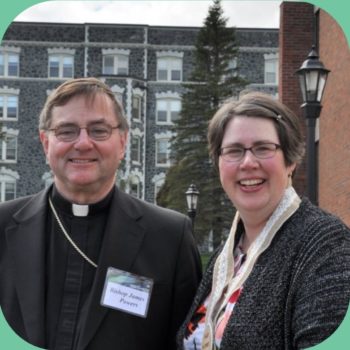 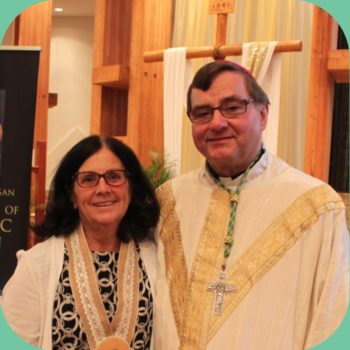 A group of ladies met in the parish hall on September 14, 1924 to organize a Catholic Ladies Guild. Election of officers took place and the following were the first officers: President – Jane Peterson (Mrs. L.L.), Vice-President – Mrs. P.H. O’Rourke, Secretary – Mrs. John Wallace, and Treasurer – Mrs. Mike O’Brien. The group decided to have a bake sale at O’Connell’s store September 20th. All thirty women in attendance were asked to furnish baked goods for the sale. Each member present was asked to bring a friend to the next meeting which was scheduled for September 23rd. Fr. Ignatius Kinney, the pastor, attended this meeting and was asked to announce the meeting at all the masses. Fr. Kinney suggested the name for the group and recommended the organization be independent of the parish in order to handle their own finances. The motions were made and carried. The Catholic Ladies Guild was formed.

Mrs. O’Rourke reported $27.70 was taken in at the sale and $ .90 was spent for advertising, leaving a balance of $26.80. It was decided that The First National Bank would be used for thier account and that they would pay rent for the use of the parish hall. Regular meetings were to be held eery other Wednesday with dues of $1.00 per year and $ .15 at each meeting. Mrs. O’Rourke suggested members be divided into groups to sponsor card parties. Three items were to be served at each party and the committee was to pay for the food served.

Parish needs suggested were for dishtowels and a quilt for the priest’s house. Each member was asked to bring a dishtowel to the next meeting, clearly marked for St. Patrick’s guild. Three quilts were made for the priest’s house. A group was appointed at each meeting to serve the next event /meeting. It was decided to invite the ladies living in the country to the next meeting. 38 new members attended the October 8th meeting. A Constitution and by-laws were made and approved. The treasurer’s report showed a profit of $35.05 at the card party, dues of $10.10 and expenses of $ .90 leaving a balance on hand of $71.95. Bills were submitted for Secretary and Treasurer books from E. A. Harding – $1.95; material for quilts from Birkmose and Co. $15.74; and Jos. Sherry $1.50. Motion to pay bills carried. Motion to charge $ .15 for lunch carried. 56 ladies were present. Ten ladies turned in dishtowels.

With warmer weather, plans were made to have a picnic in Prospect Park each summer starting in 1925 and continued for several years. Mrs. Casanova formed an Altar Society in Mary of 1926. Not much written in the minutes re: its function. Fr. Peter Rice was made pastor in 1926 and attended the September meeting to make plans for the new year. 95 members were present. There were several needs in the parish house and the church kitchen which were funded by continued bake sales and card members.

An annual Fall Banquet started in 1927 @ $1.00 / person. Every year in October the Knights of Columbus (KC’s) invited the Ladies Guild to join them for a fun night of cards, bingo, dancing, or a basket social which were popular events. In 1932 the guild was diided into seeral groups, each with a leader who was responsible to phone her committee. They continued to be responsible for sering at meetings, in turn, and were always assigned at the close of each meeting when it was their turn to serve.

In September of 1949 Adeline Ruemmele suggested study clubs and materials to be used. At about the same time a Junior League was formed as an adjunct to the Ladies Guild for young ladies of the parish. It was disbanded in 1951.

The first blood bank was held at St. Patrick’s in December of 1949. At the recommendaton of the Bishop, Mrs. Shea started a library in 1941. Each year the Guild made a donation to help expand the library.

April 27, 1950 was the date of the first Deanery meeting at St. Patrick. In 1951 active participation in the NCCW began with the prayer to Our Lady of Good Council recited to open all meetings.

The Ways and Means Committee was responsible for fund raising to cover various donations to the library, masses for deceased members, etc. A school picnic was started for the Sisters and children of St. Patrick School and continued each year in June. Each fall the first meeting of the Guild was usually a shower for the sisters teaching at St. Patrick School. It consisted of canned goods and some fresh garden produce and fruit. This annual shower continued until the late 1980’s.

It was about this time the Bishop said eery lady in the parish was a member of the Ladies’ Guild. The officers divided everyone into circles which were named with saints’ names and were expected to sere funeral dinners. They tried to do the groups geographically and were expected to meet in homes to plan for a bazaar to be held in the Fall as a fund raiser. Each circle was to pick the type of booth they were interested in furnishing. A Thanksgiving clothing drive was held each year for a while until it was not needed anymore. The ladies were planning to meet in a body the first Sunday each month for communion, but it was not always workable with small children.

On June 13, 1953 a dinner was served after Father Dabruzzi said his first mass after his ordination. Breakfasts were also served for special occasions: Mother / children, KC’s Father / Son.

Monsignor Owens requested that the ladies serve a dinner for the priests who attended the closing of the Forty Hours, which was held once a year.

Beretil Bauernfiend was elected president of the Diocesan CCW at a meeting held at St. Patrick in Erin. There were new directives for parish re-orginazation due to joining the NCCW and it was decided to withdraw from the WCCW at this time. An Order of Martha group organized to sew linens for missions. They started meetings with prayer and met in homes of members. Some made Communion dresses for the Pope’s Storeroom which distributed them to needy countries.

Bishop Hammes started the Pax Christi award for a deserving woman who was active in her parish and led an exemplary life. It was awarded to Sister Bernadette in 2002 at the annual meeting. Fifteen PCCW members from St. Patrick attended that meeting.